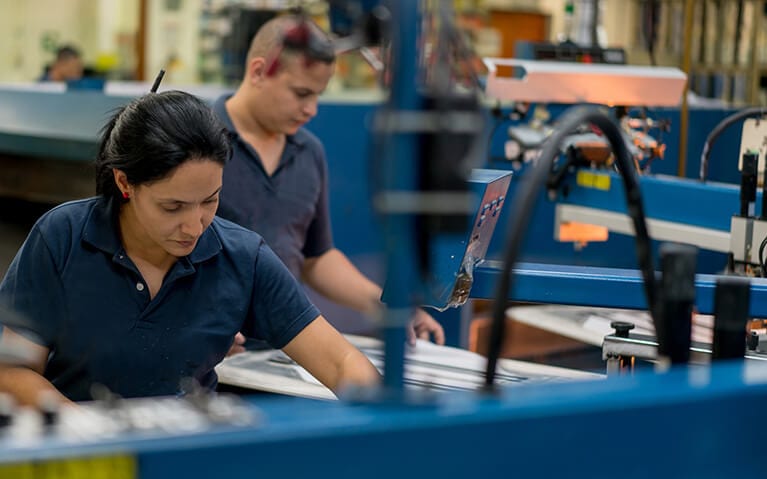 Absenteeism—generally defined as the repeated pattern of habitual absence from work—has been a decades-long challenge for many companies. More recently, absenteeism has been especially acute in industries with frontline workers.

It is understandable, to be sure. Worker absences ballooned in 2020 due to COVID-19, with millions of employees unable to work because of illness themselves or because they were caring for sick children and other family members. In November 2020, for example, about 1.8 million workers called out sick, according to statistics from the Census Bureau’s Household Pulse Survey. 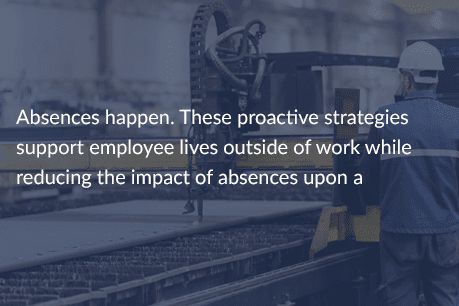 Managing the impact of worker absences is a complex matter, and the consequence to operations is only compounded by the ongoing shortage of labor in organizations with shift workers. The manufacturing industry has been hit particularly hard, and according to a study by Deloitte and The Manufacturing Institute, this will be a continuing trend. As many as 2.1 million manufacturing jobs are projected to be unfilled through 2030. This shortage will negatively impact production and revenue and could ultimately cost the U.S. economy up to a staggering $1 trillion by 2030.

As challenging as absenteeism and unexpected absences can be for employers, there is good news. By establishing and implementing an effective absence management strategy, managers won’t have to continually play defense the moment they walk in the door. There are tangible payoffs, too, with employers seeing related benefits: lower OT costs, reduced turnover, improved employee morale, and optimized productivity. A reliable workforce is essential to avoid shutting down lines, missing production goals, and delaying shipments.

Life circumstances such as illness, emergencies, and other unexpected scenarios are valid reasons employees repeatedly call out, come in late, leave early, or take extended or unscheduled breaks. Employers cannot control these life circumstances, so they should consider pivoting away from punitive measures in response to them, and instead take a proactive approach to manage around them.

Establish callout mechanisms for employees to easily call out in advance of an absence. Offering shift-trading capabilities will allow employees some flexibility in their work schedules, while also freeing up supervisors from having to fill unexpected open shifts at the last minute. Voluntary callout programs allow employees to put themselves on lists to be the first to be unscheduled if the company needs fewer people. These and other worker-centric scheduling strategies support employees’ lives outside of work while reducing the impact of their valid absence on the business.

Simply put: a work environment that is less safe, fulfilling, or rewarding will magnify an employee’s temptation to stay away from it, sowing the seeds for a pattern of repeated absences.

For many 24/7 industries that rely heavily on shift employees—especially manufacturing, healthcare, energy, and the public sector—employee safety is understandably top of mind. However, many operations managers fail to recognize that a key cause of some critical safety issues, such as fatigue, is the employee schedule itself.

Supervisors must ensure enough workers are scheduled for each shift to meet demand while also ensuring that their employees are well-rested when they come to work. Scheduling is a key factor in employees being worn out; either from working too many shifts in a row or working without having a rest period for adequate sleep between shifts. Fatigue is a consequence of poor schedule design and can be a key driver of absences in 24/7 industries.

While mitigating against fatigue can be achieved with fatigue risk management policies, its success is largely dependent on the accurate enforcement of those policies during schedule creation. Without management’s commitment to rethinking employee scheduling from the ground up, the decades-old “tough it out” mentality becomes the default perspective. It’s this kind of work environment where accepting (or ignoring) workplace fatigue can lead to major problems.

“The science is clear,” says Mike Harnett, a human factors specialist and president of Solaris Fatigue Management. “Workplaces need to understand their role in the promotion and mitigation of fatigue. And the most important factor in their control comes down to the design of work schedules.” 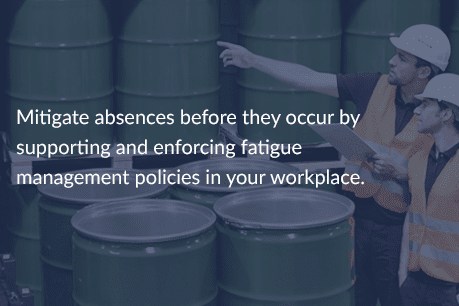 While employee well-being may be grounded in good schedule design, programs should extend to support well-rested employees when they aren’t on the clock. Creative solutions include napping pods for employees who are making long commutes as well as workout trailers for workers pulling back-to-back shifts. Employee assistance programs are also expanding to cover the costs of sleep-aid solutions like blackout drapery, light therapy, and CPAP machines to help employees who struggle with the sleep conditions that come with 24/7 industries.

It’s safe to say that without programs in place to support employees’ well-being throughout their employment experience—both on and off the clock—employers will have to contend with higher rates of unplanned absenteeism.

Best Practice 3: Provide Employees with Some Control Over Their Work Schedules

Findings from Shiftboard’s 2019 State of the Hourly Worker survey indicate that for many of the 82 million hourly workers in the United States, who represent nearly 60 percent of the total workforce, a culture focused on work-life balance and job satisfaction could be notably lacking in their work environments.

In the survey, a staggering 69 percent of hourly workers said they are likely to seek a new position in the near future, and 77 percent stated work-life balance was a necessary factor to feel very satisfied with their job. In fact, achieving work-life balance was identified as the number one driver of job satisfaction, ranking even higher than being paid well.

A direct—and compelling—correlation also exists between the level of control employees feel over their job and the level of job satisfaction they experience. An astounding 85 percent of hourly workers responded to the survey saying that having more control over their work schedules impacts their overall job satisfaction, and nearly half said they would take a pay cut in exchange for more control over their schedules. Organizations that score high among employees for job satisfaction understand and internalize the concept that employees who feel healthy, safe, and satisfied with their job also feel empowered at work.

Having some control over overtime schedules also plays an important role in employee satisfaction. Some employees welcome overtime, while others see it as a burden. Managers must distinguish the difference and set clear policies around scheduling mandatory overtime (sometimes referred to as forced overtime), and offering volunteer overtime (which is roughly defined by an employee deciding if, or how much, overtime they will work).

Self-serve scheduling is a powerful tool in managing these aspects of overtime. By utilizing strategies that enable employees to exert control over their overtime scheduling, both the employees and the organization see tremendous gains. Consider the case of one Shiftboard customer, a multi-national manufacturer and distributor of medical supplies, who was struggling to fill mandatory overtime shifts. Shifting gears, they decided to change their overtime policy to a completely voluntary basis, where employees signed up if they wanted to work overtime shifts. The results were “extraordinary,” explains Shiftboard chief marketing officer Steve O’Brian. “They increased the fill rate of overtime shifts to almost 100 percent every week,” O’Brian says. “This is a great example of a win-win—the company got overtime filled, and the employees who wanted to work extra got the overtime hours.”

Voluntary overtime and self-serve scheduling can vastly improve shift coverage, and it not only allows employees to have a say in when they’re working, but also in what they’re doing on the job, too. Employees experience higher job satisfaction when performing tasks in their areas of skill or interest. These benefits can be amplified when employees have a visible choice in the matter, an option further facilitated by self-scheduling capabilities. It’s a win for productivity, too! Performing tasks employees enjoy and are good at keeps them engaged and motivated.

The takeaway is clear: Putting employees in the driver’s seat with respect to workplace issues like scheduling is instrumental in keeping them happy in their jobs—and coming into work every day.

One essential strategy for combating absenteeism is communicating to your staff how employee schedules are created and how employee absences are managed. This might sound simple, yet some organizations unwisely overlook the importance of this best practice. Instead, they rely on the unwritten rules of company culture and the age-old “he said/she said/they said” back and forth, which can create a toxic environment based on perceptions of favoritism and unfairness. 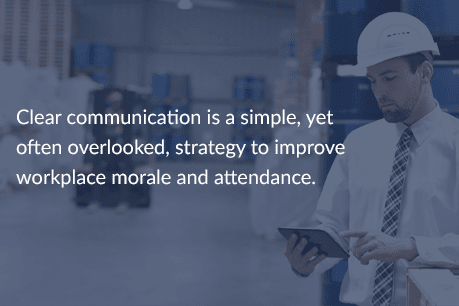 Every organization—especially those who rely on frontline and shift-based employees—should have definitive scheduling and leave policies that establish clear, easy-to-understand guidelines about schedule creation and planned and unplanned leaves. Such policies serve as valuable resources for your organization by establishing expectations, rules, and transparency related to employee schedules. Providing employees with a clear understanding of how shifts are allocated and scheduled builds trust and helps reduce the frustration and negativity that can lead to callouts and unexpected absences.

How Technology Can Help

Managing and reducing absenteeism is a formidable and ongoing task, no doubt. But it’s not one that companies have to tackle on their own. By implementing employee scheduling software, AK Steel (which was acquired by Cleveland Cliffs) reduced absenteeism by 38 percent. Shiftboard customers, on average, reported an 86 percent improvement in shift coverage rates and a 30 percent decrease in hours spent creating schedules after implementing strategic scheduling solutions. Impressive data points for sure, suggesting these workforces operate with higher engagement and less absenteeism.

Proactive employee scheduling strategies play a critical role in reducing absenteeism, ensuring that an organization can depend on its workers showing up when they’re supposed to—and, vice versa, that employees can rely on their employers to provide a safe workplace and satisfying employment.

Learn how leading manufacturers are taking a proactive approach to employee attraction, engagement, and retention.

The 5 Myths of Overtime Management: How to Make OT Work for Your Business

Managing hourly worker overtime is a complex workforce challenge, but it’s not impossible.

Learn six best practices for developing an employee scheduling strategy that will help you improve productivity and reduce costs.

Get the latest employee scheduling insights delivered straight to your inbox.